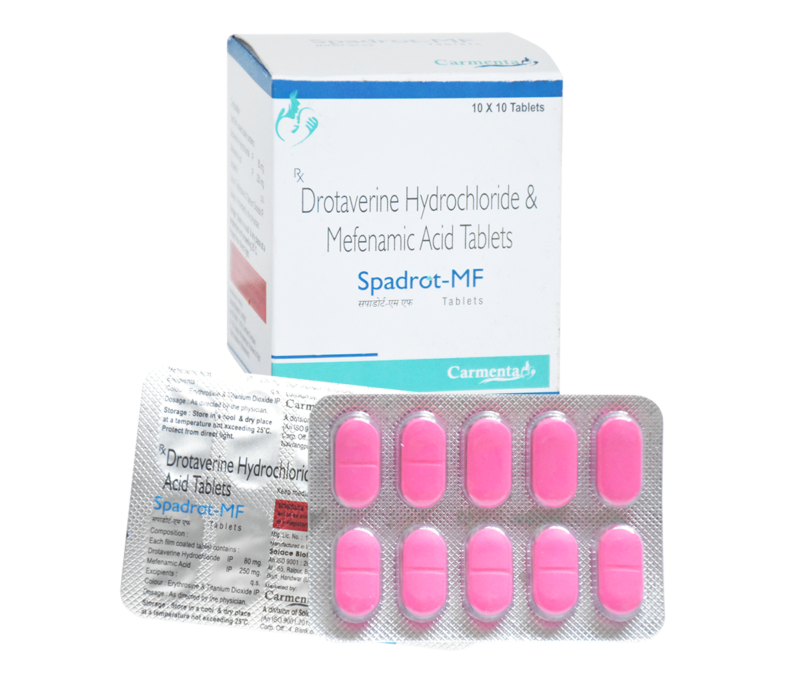 It is an anti-spasmodic drug which is structurally related to papaverine. It has no anticholinergic effect and is a selective phosphodiesterase 4 inhibitor. Drotaverine is shown to possess a dose dependent analgesic effect.

It is a NSAID which is used for the treatment of pain. It decreases the swelling in inflammation and also uterine contractions. It also inhibits PG synthesis.

It produces its pharmacological action by binding to prostaglandin synthetase receptors COX-1 and COX-2 and causes the inhibition of its action.  As these plays a major role in causing inflammation.

After administration it is well absorbed in the body. It is a spasmolytic agent by inhibiting phosphodiesterase enzyme 4 in smooth muscle cells. Bioavailability of the drug is highly variable. It get rapidly absorbed from duodenal ileal segments

The excretion of the drug is through biliary excretion and feces.

It is rapidly absorbed after oral administration. The mean peak levels of mefenamic acid are ranging from 10-20mcg/ml3. Co-administration of mefenamic with antacid increases the absorption rate of magnesium hydroxide.

It is well distributed in the body with 90% of the drug is bound to plasma protein. The volume of distribution of the drug is 1.06 l/kg. It is metabolized by liver cytochrome P450 enzyme CYP2C9 to 3-hydroxymethyl mefenamic acid (Metabolite I).

We are glad that you preferred to contact us. Please fill our short form and one of our friendly team members will contact you back.